After successfully publishing “Tadok da Tennol” in the Regional and National Levels, Kalinga Division was awarded a Certificate of Recognition by DepEd CAR last August. Kalinga was one of the three divisions that belonged to the first batch of awardees. The other two were Benguet and Abra. 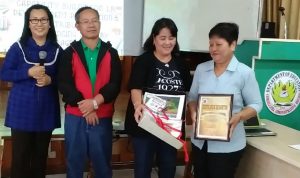 “Tadok da Tennol” is a storybook in the Limos language written by Ms. Ginadine L. Balagso and was illustrated by Czar Nino M. Talamayan. It can be recalled that the story book was one of the outputs produced in a series of contextualization   activities by the Pinukpuk Central School under the PRIME. The learning materials underwent series of reviews and were validated by the elder representatives. With the continuous quality assurance of developed learner materials, it is expected that more of these will be sent to the Regional LRMDC for final review and eventually will be accepted for publication in the National LRMDS portal.

Calendar of important upcoming activities are still to be updated. Please check back again later.